Except for salary sacrifice equity acquisition, GRG’s experience indicates that properly structured and weighted long term variable remuneration (LTVR) is the best and fairest way to facilitate executives to have more “skin-in-the-game”. However, the way that most LTVR plans are structured neither assists nor compels executives to retain the equity earned. This Insight examines practical approaches that can be used to achieve more “skin-in-the-game” for senior executives through optimisation of LTVR plans to facilitate longer term holding of equity interests. Many of the same principles can be applied to short term variable remuneration (STVR) deferral also, if applicable, however previous research has shown that the introduction of STVR deferral has reduced LTVR’s weighting in the remuneration mix for executives, which can undermine shareholder alignment.

Navigate the complexities of executive remuneration with GRG

The most common design features of LTVR plans utilised by ASX listed companies include:

In Australia, tax becomes payable on equity acquired during employment at:

The taxing event almost invariably triggers executives to sell shares to generate the necessary funds to pay the tax due, which in turn reduces the “skin-in-the-game” by around 50% for most executives. Moreover, when executives decide to sell shares to cover the tax liability, they seem to go beyond the sufficient amounts to cover the tax and also sell the reminder of the shares on which tax is payable, which often results in no shares being held beyond the vesting period.

In view of the foregoing, the key to more “skin-in-the-game” is to delay the taxing point, which in turn will delay the trigger to sell shares.

In 2017 Korn Ferry conducted a study of the average tenure of CEOs and other C-suite executives in the top 1,000 US companies by revenue, which indicated that average tenure was 8 years for CEOs and 5 years or less for other C-suite executives. A 2018 study by Equilar on CEO tenure in S&P500 companies came up with similar results; and other less comprehensive studies in Australia have produced comparable results to the USA studies.

The results of the tenure studies are presented in the following graph along with the over-lapping cycles created by typical LTVR plans utilised in Australia – the blue marked periods of 3 years. Observations in relation to the graph include: 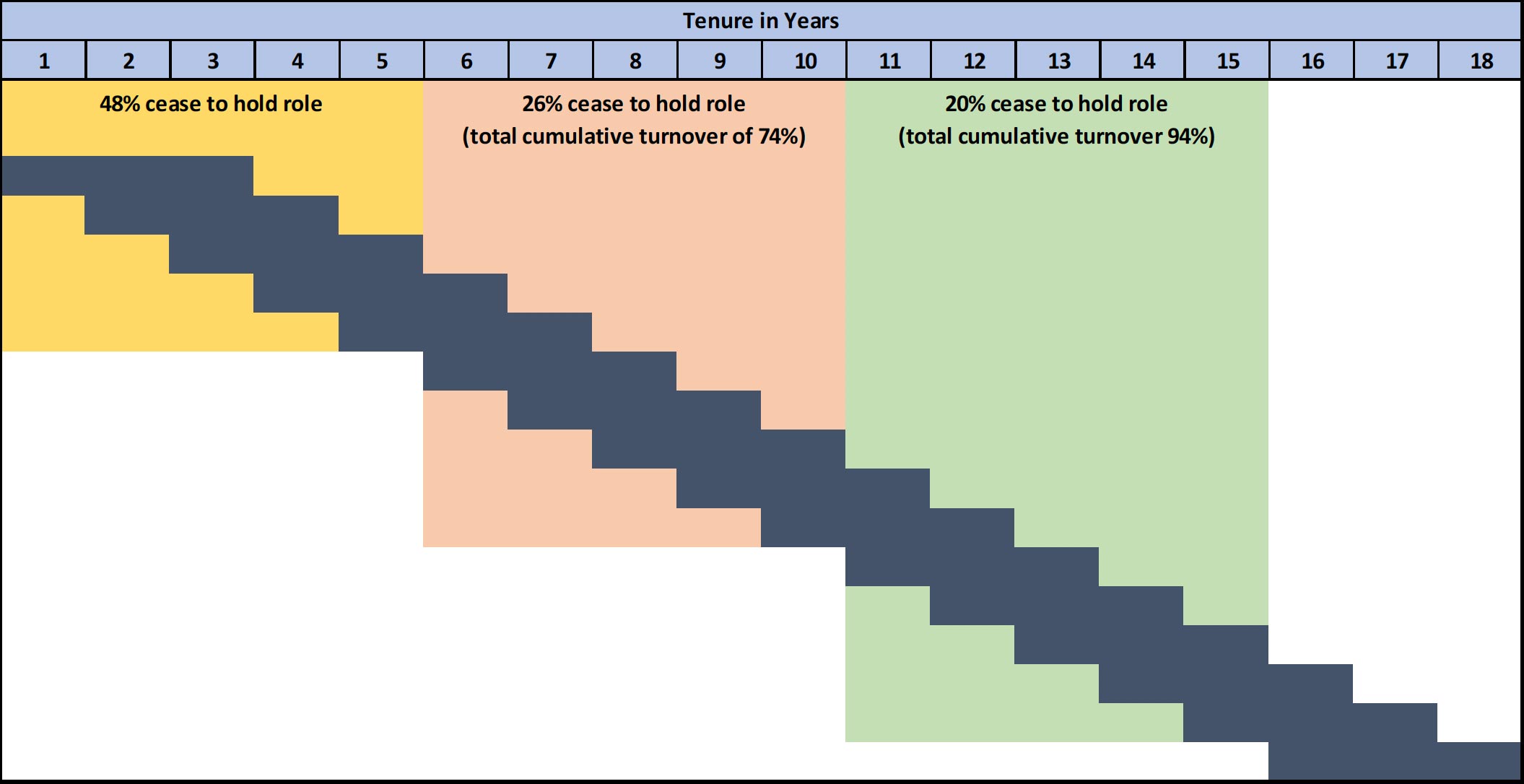 Holding periods are generally achieved by either:

Five alternative approaches to facilitating holding beyond the vesting period are raised for consideration but, of course other variations may be considered.

GRG’s view is that Alternative 1 is the least supportive of equity holding guidelines as it is unlikely to result in adequate equity being held by executives with more than 5 years of service. Of the others, it is clear that Alternatives 2 and 3 should be considered if a company requires most of its executives with more than 5 years of service to meet equity holding guidelines but does not wish to apply onerous holding policies on very long serving executives. In this regard it should be noted that a holding policy that covers 6 or 10 years will not necessarily result in executives wanting/having to sell after 6 or 10 years particularly if a taxing point is not triggered by the elapse of the 6 or 10 years (e.g. in the case of manual exercise following a restriction period).

GRG tends to favour Alternative 3 (or the flexible approach using 3 as its basis) as it is less likely to result in share sales during employment which may attract adverse commentary from stakeholders and adversely affect the reputations of the executives and the board.

The other advantage of this approach is that the executive ends up holding shares and therefore can receive dividends and vote the shares.

However, the main problem with this approach is the inflexibility resulting from being unable to change the disposal restriction period once it is set when the rights are granted. Thus, if for some reason it becomes desirable or necessary for an executive to sell shares before the end of the disposal restriction period then the executive will not be able to make the sale unless they resign to trigger a cessation of employment event to have access to their locked up equity benefits. To counter this problem and avoid compelling executives in genuine need to access their equity to resign, exercise restrictions can be utilised as explained below.

This comes with the added benefit of enabling malus/clawback clauses – it is much harder to recover a vested share, than it is to cancel an unexercised Right.

The disadvantage of holding vested rights subject to exercise restrictions instead of shares subject to disposal restrictions is that the holder of the rights would not be entitled to receive dividends. Accordingly, to not disadvantage executives who hold vested rights they would need to be compensated for the dividends and franking credits not received. There are several ways by which this may be achieved and which GRG can advise on.

If companies wish to ensure that equity holding guidelines are observed or prefer executives to maintain “skin-in-the-game” then LTVR plans (and possibly deferred STVR grants) need to be adjusted to impose holding policies in relation to either vested rights or shares acquired on exercise of vested rights. The optimal holding period seems to be 7 years following vesting of rights although shorter and longer periods could also be considered.

Keep up to date with more Remuneration Insights like this