Total Shareholder return (TSR) represents the return experienced by shareholders from an investment in a company’s shares over a period of time assuming that dividends are reinvested into the company’s shares. It has become an essential vesting condition for long term incentive (LTI) grants of equity units (mainly rights and options). This is because it reflects the experience of shareholders, and is therefore effective in creating alignment between the interests of management and the interests of shareholders.

There are various ways in which TSR may be used as a vesting condition including:

LTIs typically have performance measurement periods of three or more years, usually commencing at the beginning of the financial year in which a grant of LTI is made.

Each of the TSR alternatives are discussed below.

Partner with GRG to align your executive pay to performance

Our incentives services, advice and recommendations aim to be clear, precise and transparent so you can manage incentive issues cost-effectively and strategically.

The following scale is an example of the application of absolute TSR as an LTI vesting condition.

The threshold, target and stretch levels of TSR are determined at the beginning of the measurement period. Thus, they are determined in advance having regard to expectations for the company’s performance in the context of expectations of the broader market (economic sentiment and market trends) but the market may not behave as expected. It is the fact that markets often do not behave as expected during a measurement period that has led to criticism of the use of absolute TSR. It is seen as open to producing windfall gains for executives when the market moves upwards more than anticipated at the beginning of the measurement period, which is generally taken to give the TSR of the company a boost which is unrelated to the activities of the company or executives. Further, assumptions made by boards about market movements during measurement periods are typically not explained or justified, leaving this metric open to criticism of not being transparent and not being set at sufficiently challenging levels.

For these reasons it is generally not supported by various stakeholders and is used much less frequently than other forms of TSR. However it is a fact that absolute TSR does have the advantage of only generating vesting for executives when shareholder value/wealth has increased over the measurement period.

The following scale is an example of the application of relative TSR using a comparator group of companies to determine ranking of TSR performance, as an LTI vesting condition.

A challenge for many companies that have looked at using or have used this form of TSR as a vesting condition has been the selection of an appropriate comparator group of companies. This has been because most industry sectors represented on the ASX contain too few companies of similar size that face similar business challenges. When small groups of companies are used, a movement of one place in the ranking can produce large changes in percentile ranking and in vesting percentages.

In the following example the comparator group consisted of eight companies which over the measurement period produced TSRs of between 20% and 45%. The companies were ranked from lowest to highest TSR. The P50 and P75 outcomes were 39% and 42%, respectively. 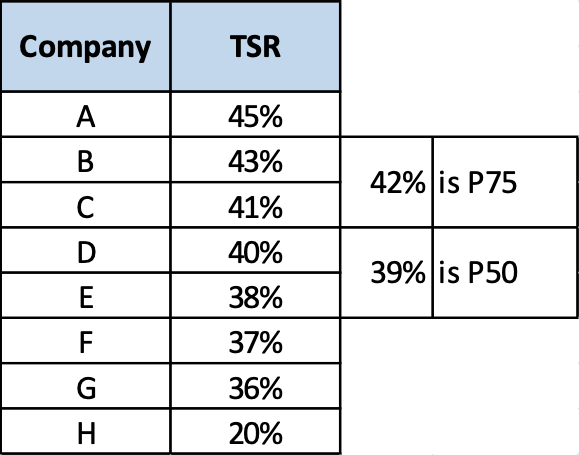 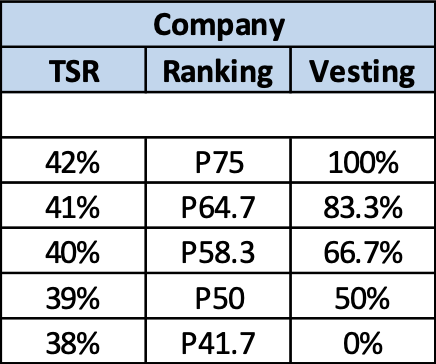 Each 1% improvement in TSR between 39% (P50) and 42% (P75) would produce an 8.3 percentile ranking improvement and a 16.7% improvement in vesting. Over a three year measurement period, this is the difference between an annual TSR of 11.6% and 12.4%, less than 1% p.a. With such small changes in the company’s TSR producing such large changes in percentile ranking and vesting it raises the question of statistical significance i.e. are the outcomes reflections of performance or outcomes of chance.

If one or more of the companies in a small comparator group cease to be listed on the ASX prior to the end of the measurement period for whatever reasons then significance of the assessment will be further compromised. Over a three year measurement period the attrition rate in some parts of the market due to delisting, mergers, acquisitions or suspension have been observed to be in the range of 15% or more. In September 2015 alone, around 32 companies delisted from the ASX.
Given that a comparator group would need to be composed of a significant number of companies in order to produce results that were statistically significant e.g. 50, it would be rare for a balanced (equal number of comparator group companies being larger and smaller than the company) comparator group to be available from most industry sectors represented on the ASX. It is, perhaps, this fact that has led to many comparator groups being not industry specific but broader reflections of the market. When this is done the validity and reliability of the ranking is undermined because the assumption that the group is homogenous and influenced in similar ways by the market does not apply.

Another aspect to note in relation to relative TSR using a comparator group is that, as shown in the above example, a narrow range between P50 and P75 performance can arise with the result that small incremental performance can produce large incremental vesting. The need for spread between P50 and P75 performance has been ignored by most stakeholders probably due to the fact that a reasonable spread would be expected in most circumstances, particularly when the market is behaving as may typically be expected.

Relative TSR Using An Accumulation Index as a Benchmark

This type of relative TSR tends to be called either Market Adjusted TSR (MATSR) or indexed TSR (iTSR).

MATSR/iTSR seeks to replace a comparator group with an accumulation index in order to judge whether the TSR of the company has exceeded generalised market movements unrelated to performance. It also replaces the generic vesting scale that is almost universally applied with a customised vesting scale to reflect specific expectations of company performance based on industry, business plans and shareholder expectations. An accumulation index reflects TSR for the group of companies comprising the index whereas a share price index focuses on share price only, ignoring dividends. Using iTSR avoids the challenge of selecting specific companies and avoiding potential criticism for “cherry picking” comparator group companies. Administration costs are also reduced as the cost of comparing a company’s TSR performance against an accumulation index is cheaper than comparing it to a group of companies.

The following scale is an example of the application of iTSR as an LTI vesting condition.

Analysis of the TSR performance of ASX300 companies over the last 3 to 5 years indicates that P75 performance is close to 200% of the index’s movement and that P50 performance falls close to 100% of the index’s movement. In these circumstances the above example vesting scale indicates that the company is expecting to outperform the market and is targeting outperformance by 50%. Thus the vesting scale has been tailored to reflect the company’s specific circumstances, a feature that is rarely seen when a relative TSR comparator group is used.

A feature of iTSR is that the vesting scale is most applicable when the company’s TSR and the index’s movements are both positive. It would be expected that a negative or flat accumulation index would rarely occur and would be best addressed via board discretion. When the company’s TSR is negative over the measurement period it is usual for nil vesting to apply with no board discretion. The rationale being that if shareholder value has not grown over the measurement period then executives should not benefit from LTI vesting.

A narrow range between 100% and 200% of the market can arise when the accumulation index movement over the measurement period is minimal e.g. index movement of 3% means full vesting at 6% if the above example vesting scale applies. Assuming that 6% is similar to P75 performance for the companies in the index then there is no difference in the vesting outcome that would be generated by applying comparator group relative TSR or iTSR.

If the possibility of a narrow range between 100% and 200% of market movement is seen as a problem in terms of incremental vesting then both target and stretch performance levels could be set as fixed percentage TSRs in excess of the market movement (accumulation index movement). Judgement will need to be applied in setting the fixed outperformance levels but they can avoid the possibility of high incremental vesting when minimal levels of outperformance of the market are achieved. An example of an alternative vesting scale is provided below. In the example if the market moved 3% then to achieve full vesting the company’s TSR would need to be 23%.

The above vesting scale is a combination of indexed relative and absolute TSR.

Applying iTSR vesting scales as percentages of outperformance of the market movement seeks to maintain the essential feature of comparative TSR metrics i.e. relativity to the market. If fixed amounts of outperformance were to be used then in some case that may, with the benefit of hindsight, prove to be too low or too high. In such cases, board discretion would be expected to apply.

For iTSR it is common practice for a positive company TSR gate to be applied before the vesting scale is considered. This is to ensure that executives do not receive benefits from LTIs when shareholder value has been lost. In the case of RTSR, it is not uncommon for there to be no gate and for vesting to occur when the company’s TSR is negative. Such an outcome is generally not well regarded by stakeholders and is often considered likely to increase the risk of a strike against the remuneration report.

The following table provides a comparison of typical iTSR outcomes compared to typical RTSR outcomes in the context of three categories of market movement:

It has been observed that some stakeholder groups are sceptical of the application of board discretion to LTI vesting and are suspicious that it will be used to increase vesting in ways that are unjustified and not transparent. If this is likely to be a concern then it would be possible to set parameters for the application of board discretion for example specifying a range of vesting that will apply when index movements have been low or negative, and the Company’s TSR has been positive. For example a supplementary scale may apply that specifies vesting on the basis of absolute TSR when the index has been negative, since the issue of windfall gains would no longer apply in such circumstances. This may give comfort and assurance to sceptical observers that discretion will be used to ensure appropriate outcomes, if they are unable to trust the board to do so otherwise.

Of the two versions of relative TSR the comparator group approach is the most widely used but its dominance is declining due to the increasingly evident shortcomings outlined in this paper, and the introduction of additional/alternative metrics (financial and operational) and the move to MATSR/iTSR.

Various stakeholders have been calling for boards to use vesting conditions that are more appropriate to their circumstances rather than simply following the leader and adopting the typical comparator group relative TSR approach. MATSR/iTSR is an alternative that responds to that call and it will be interesting to observe the reaction of proxy advisors and other stakeholders. A narrow minded negative response will most likely set back the emerging attempts by boards to set more appropriate vesting conditions for LTI grants of equity units that are better aligned with stakeholder interests and the Company’s circumstances.

Keep up to date with more Remuneration Insights like this