Boards are often finding themselves under pressure, with no obvious choices or guidance under their equity plans, when a change of control, demerger or major return of capital occurs. This is because the Plan Rules that govern long term variable remuneration (LTVR) plans rarely include specific rules covering demerger or return of capital situations. Rules that cover change-of-control or capital reconstructions are usually not much short of useless when boards are faced with the reality of managing competing stakeholder pressures. Rarely is a distinction made between a change of control resulting in a delisting, when the result will be no market for employee equity, as distinct from a case where the Company remains listed. Similarly, rules that deal with cessation of employment (usually relevant for employees of the demerged entity and those who become redundant as a result of the demerger) generally do not adequately deal with demerger triggered cessations of employment. This GRG Remuneration Insight seeks to identify various demerger situations and possible approaches for consideration by boards. GRG has previously published, and will continue to publish, Remuneration Insights on other cases such as change of control.

Of course, hybrid situations could emerge but for purposes of this Insight the distinct alternatives presented above are discussed.

Before suggesting possible approaches to determining outcomes for LTVR participants when a demerger occurs, it may be helpful to first consider some basic principles that should inform such decisions. These principles include:

Reference should be made to the Appendix to this Insight for a summary of the demerger situations, employee groups and recommended possible approaches to the treatment of prior year LTVR grants. Demerger situations are not all the same and may require different approaches to prior grants of LTVR. Also, there are various employee circumstances that need to be considered along with fairness in the treatment of these employee circumstance groups. Measurement challenges often require board discretion which can be problematic, or ideally a default level of award to be specified in rules. This is a complex area where LTVR Plan Rules need to be amended so as to allow different approaches to be applied to continuing and former employees as determined by the board. Board discretion will generally leave the board struggling to find the right outcome under competing pressures from employees, governance commentators, and buyers of the demerged entity. 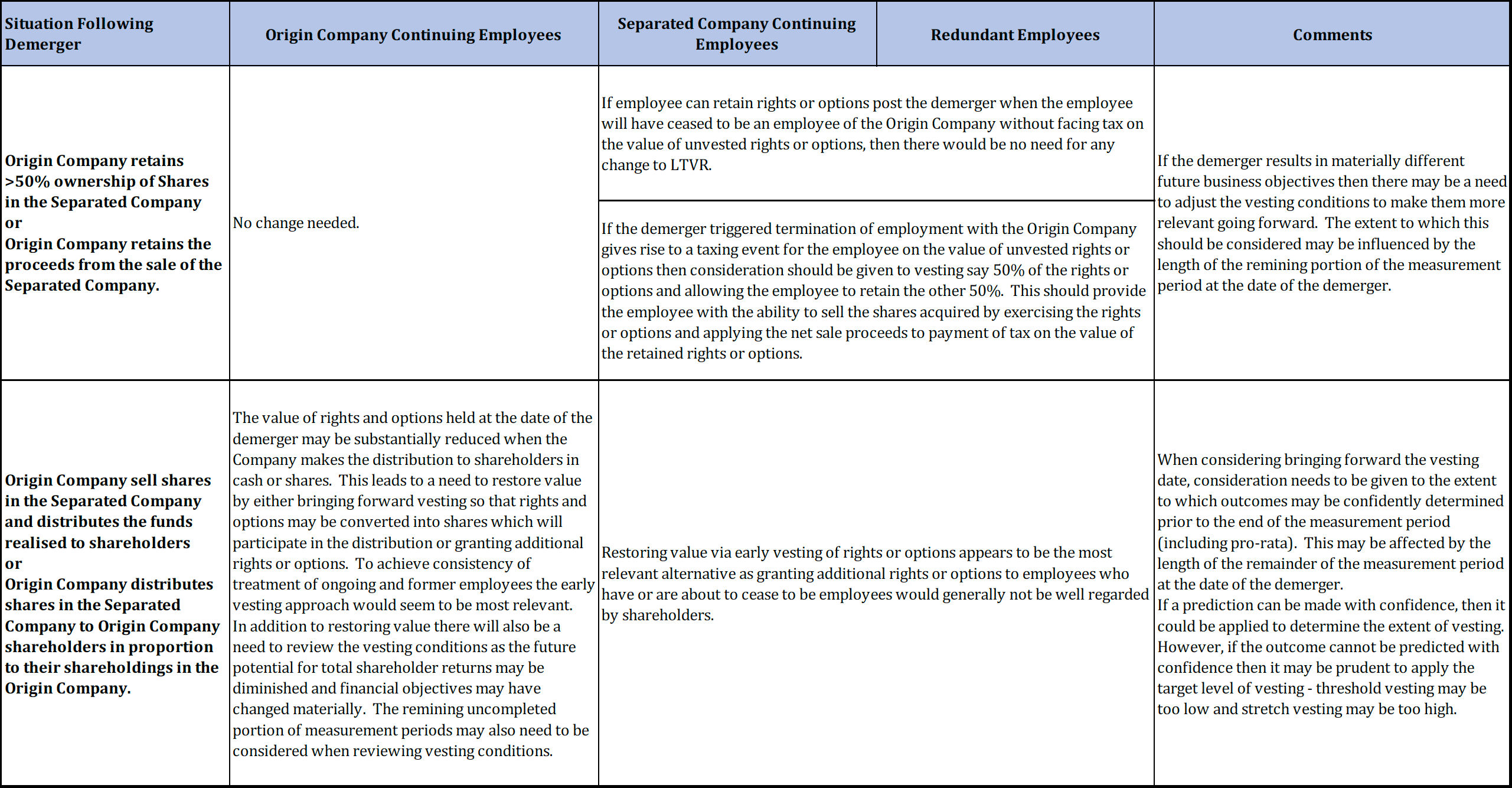